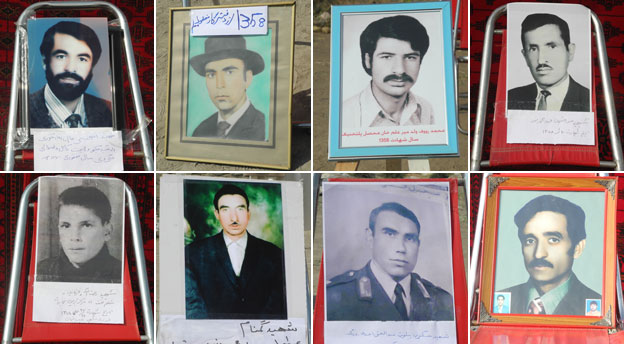 Portraits of those who were executed

A year ago, a Dutch prosecutor published a list of 5,000 names, which immediately led to scenes of public mourning in Afghanistan. These were the names of people killed after a communist coup d’etat in 1978 – and some of those with blood on their hands are now living in Europe.

According to Dutch prosecutors there is enough evidence to charge several Afghans living in the Netherlands with war crimes, and a number living in other European countries – though some countries are pursuing the cases more vigorously than others.

The suspects do not know they are being investigated and it was only when one died before he could be brought to justice that the list was published.

This man was known in court papers only as “Commander O” but his full name Amanullah Osman can now be revealed.

In the Netherlands, he made no secret of his past as a secret policeman in Afghanistan, believing that it would assist his application for asylum. He reasoned that if he disclosed it, he could not be returned to Afghanistan, where his life would be in danger. He did not imagine he would end up facing trial as a war criminal instead.

When asked if anybody had been maltreated in his custody, he said: “Of course, and I was responsible for that maltreatment. That is how things go in Afghanistan.”

A mass of evidence was collected in preparation for his prosecution, including original documents signed by Commander Osman, transferring people for torture and execution.

After Osman’s death, State Prosecutor Thijs Berger published part of his evidence online as a public service to the relatives of the victims – a list of around 5,000 names of people executed in 1978 and 1979.

Among the names are students, traders, shopkeepers, teachers, farmers, a bus driver, a postman and a retired judge – some of those killed are pictured at the top of this article.

The publication of the death list had a huge impact in Afghanistan. There were immediate ceremonies of remembrance for those who died.

Some on the list had in fact survived. Those with powerful friends had been quietly released instead of being murdered – among them a man who would later add the name “Sayyaf”, meaning “skilled swordsman”, to his name Abdul Rassul.

Sayyaf went on to become a notorious guerrilla leader. It was he who invited Osama bin Laden to Afghanistan, and although he has denied involvement in war crimes in the 1990s, he has been accused in several authoritative investigations. He was a failed candidate for president this year.

But others who survived by chance were simply overlooked in the chaos of mass executions. One of the people on the death list, Habib Rahman, says he has lived most of his life on borrowed time. He was arrested and tortured in the chaos that followed the Saur revolution in 1978, named for the Afghan month of Saur when it took place.

“I was asleep. They smashed the door and entered the house. They told me you have to go with us. When we walked out of the door there were about 20 military cars and even an armoured tank. They took me to the investigation department of the secret police.”

For eight days and nights he was beaten and electrocuted, before he was taken to Pul-i-Charki prison near Kabul. He was held there for more than a year.

After his release, Rahman emigrated to Australia, where he became a successful businessman. When he saw his name on the list published on the internet, he returned to Pul-i-Charki for the first time since 1979.

“Every midnight they would come, call the names and kill them. From midnight, if your name was not on the list, you had a chance to live for another 24 hours,” he says.

Those named were taken out and shot on a patch of waste ground outside the prison known as the “polygon”, their bodies bulldozed into mass graves. From inside, the other prisoners could clearly hear the shots. “They were doing this on purpose to frighten the others,” Rahman says.

Relief came in the depths of winter in 1979. The prisoners heard the sky fill with helicopters and felt the ground shake with heavy armoured vehicles. A knife cut through the plastic sheeting the prisoners had wrapped around the bars of the prison, and a blond Russian head came through to announce that they would be freed.

When freedom came a few days later, Rahman was shocked because no family members had come to see him.

“There were 10,000 people getting out of the jail and everybody was received by their families or loved ones. When I walked out of the jail I couldn’t see any member of my family… I was very upset, very depressed.”

When he finally made his way home he found his brother who started to cry – the family were in mourning as Rahman’s name had appeared on a list of those executed.

The new regime imposed by Moscow had publicly displayed the list to demonstrate the tyranny of the regime they had overthrown. But it was taken down again after only a few days. It was a partial version of that list that would emerge as part of the Dutch criminal investigation.

Patti Gossman, who has been investigating Afghanistan for many years for Human Rights Watch, says that original documents from conflict areas are very rare. But what made the evidence in the Dutch case so vital was that it humanised the victims.

“It has been very hard to get hold of any kind of paper trail, which is why this list being published was so important,” she says.

The Dutch death list represents only a small fraction of many tens of thousands who died, she points out. In an effort to keep control as they imposed radical reforms, the communists carried out mass murder, particularly in the countryside.

“Their approach was not to put these people on trial as traitors or anything but just to get rid of them,” she says.

But those responsible have never faced justice, nor have the mujahideen who defeated the communists, or indeed the Taliban who followed them for any of the excesses committed during their periods of rule.

Far from investigating the record of the warlords, the post-Taliban government suppressed an exhaustive report into the crimes of the past, that mapped all of the conflicts during more than three decades, village by village.

Nader Nadery, who wrote that report, faced death threats and was dismissed from running the Afghan Human Rights Commission by President Karzai for daring to look into past war crimes. And the Western powers which had defeated the Taliban did not prevent the cover-up.

Nader Nadery said that the moment for action was in 2001 when the US-led forces were all powerful. He said that “the strongest man in this country” would not have stood up to them, believing them capable of anything.

Britain’s Foreign Secretary at the time, Jack Straw, wrote that warlords were a “fact of life” in Afghanistan.

He said that things had to be taken one step at a time. “In this kind of situation you are always in an area of acute moral hazard, which is why I am sure I made the point that we had to deal with the warlords. At the time it was better to deal with them than to have them contributing to the chaos.”

He said it was never too late for justice. But the warlords, particularly the former mujahideen from the 1980s and 90s, have reclaimed much of their power. It was they who pushed through immunity from prosecution for past crimes.

Afghanistan’s rampant corruption, and the weakness of its democracy are intimately connected to its failure to deal with war crimes. The communists at the beginning of the long war and the Taliban at the end were both brutal. But many of those entrenched in power now are conservative rural powerbrokers who have blood on their hands too.

And apart from a few isolated examples, such as the prosecutors in the Netherlands, painstakingly building cases with elusive documents, the world has preferred to look the other way.

For technical reasons, Afghanistan is not covered by the International Criminal Court for any war crimes committed before the fall of the Taliban, and a controversial law approved by President Karzai conferred immunity from prosecution inside Afghanistan.

But countries have an obligation to pursue war criminals if they come into their jurisdiction.

“We’re talking about over 30 years of war crimes being committed by all sides,” Thijs Berger told the BBC. “And nothing is really being done about it.”

Subscribe to the BBC News Magazine’s email newsletter to get articles sent to your inbox.