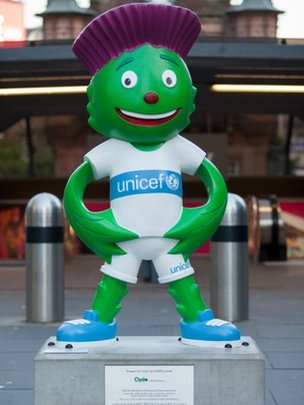 A statue of Glasgow’s 2014 Commonwealth Games mascot Clyde is to be sold to raise funds for the United Nations children’s charity, Unicef.

The statue, which carries the Unicef logo, was one of 25 designed by Glasgow schoolchildren that were displayed at sites across the city during the Games.

The fibreglass model is the only one being sold to help raise cash for Unicef’s Put Children First fund.

An appeal launched at the start of the Games raised £5m for the Unicef fund.

Glasgow City Council leader Gordon Matheson said: “Part of the lasting legacy of this partnership is the £5m raised during the 11-day sporting spectacular.

“On behalf of the city, I am delighted that Glasgow City Council is donating Unicef Clyde to Unicef so that he will be given a new home and that the funds raised for the Put Children First appeal will benefit children around the Commonwealth in a range of ways.”

Unicef’s Commonwealth Games project director, Tom Burstow, said the organisation was “immensely grateful” for the backing it had received.

“With this latest support from Glasgow City Council we will be able to save and transform even more children’s lives across the Commonwealth and in Scotland,” he said.

“The generosity of the people of Glasgow and beyond has helped us achieve something never done before. Together we have shown that we can, and will, always Put Children First.”

The 25 Clyde statues were located at various locations around Glasgow during the Games period to form Clyde’s Trail.

Glasgow City Council is looking at sites for the other 24 statues and has promised that they will remain on show to the public.