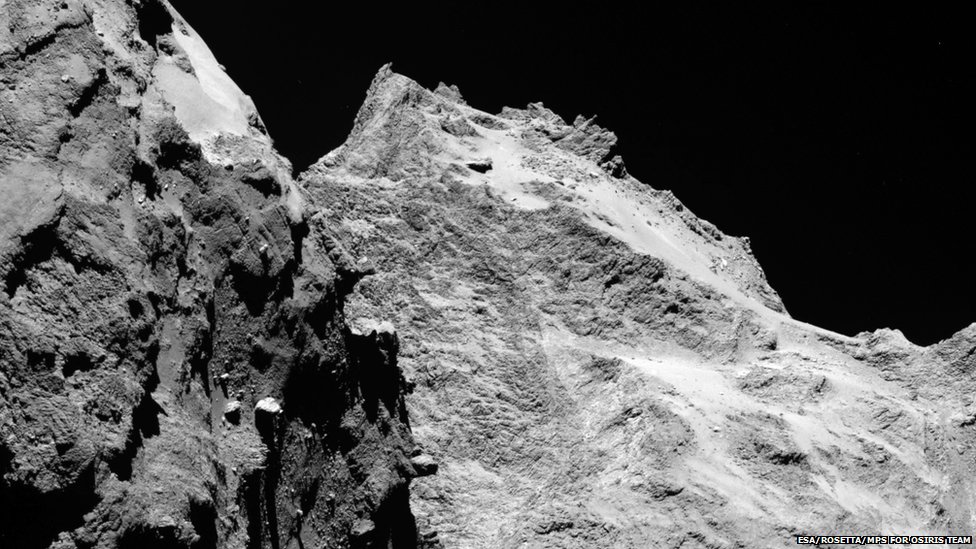 The 10-billion-tonne target: No space mission has ever made a soft landing on a comet

The European Space Agency is about to release more details of its audacious bid to try to land on a comet.

Since early August, its Rosetta probe has been in close proximity to 67P/C-G – a 10-billion-tonne mass of ice and dust some 400 million km from Earth.

Engineers and scientists have spent the weekend debating where on the surface it might be possible to put down a small contact robot.

Esa is expected to announce its primary and reserve choices on Monday.

Whichever site is chosen will be extremely challenging.

Comet 67P/Churyumov-Gerasimenko is highly irregular in shape, with a terrain that is marked by deep depressions and towering cliffs.

The plan still is to make the attempt on 11 November.

Rosetta will despatch the piggybacked Philae robot from a distance of about 10km to 67P.

The spider-like device will hope to engage the surface at “walking pace deploying screws and harpoons in an effort to lock itself down.

It will be a one shot opportunity. The event will take place so far from Earth that real-time radio control will be impossible.

Instead, the process will have to be fully automated with commands uploaded several days in advance.

To successfully soft-land on a comet would be a first in the history of space exploration.

The major objective from the outset has really been to catch the comet with the Rosetta probe and to study it from orbit.

This is happening right now. In the past few days, Rosetta manoeuvred to within 30km of 67P close enough to be gravitationally bound to the “ice mountain

The spacecraft’s array of remote-sensing instruments are currently investigating the comet’s properties, endeavouring to find out how the object is constructed and from what materials.

Everything we’ve discovered at 67P/C-G so far says that we’ve chosen a fantastic comet to visit said Dr Christopher Carr, a principal investigator on the Rosetta Plasma Consortium instruments

There’s a genuine sense of excitement within the Rosetta community, and we’re all looking forward to the year ahead

No spacecraft has ever orbited an active comet before, so there’s a lot to learn about spacecraft and instrument operations, but we’ve got a really robust mission carrying some of the best instrumentation possible, and I have to say that the operations teams at the European Space Agency are doing a great job – they are true professionals,” the Imperial College London scientist told BBC News.

But, of course, an in-situ analysis of the surface chemistry would be a huge boon to the mission overall, and this is what Philae aims to provide.

It will carry a drill to pull up comet samples into an onboard laboratory.

Scientists and engineers went into their weekend deliberations in Toulouse, France, with a long-list of five potential landing sites.

In reducing that number to two, they will have assessed the very latest imagery to be downlinked from Rosetta.

And they will continue to study the pictures in the run-up to the final go/no-go decision on the landing site, which is expected in mid-October.

Irrespective of the outcome on 11 November, Rosetta will continue to follow 67P for at least a year.

The probe will get a grandstand view of the comet as it warms on a swing around the Sun.

67P’s ices will vaporise, throwing jets of gas and an immense cloud of dust out into space