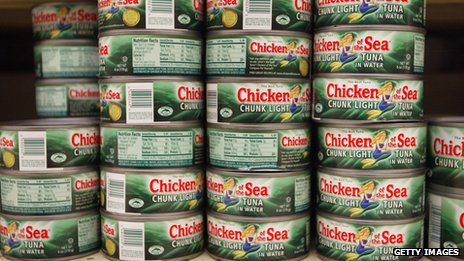 The ‘Chicken of the Sea’ brand is popular in North America

Thai Union, which owns the ‘John West’ and ‘Chicken of the Sea’ brands, is looking to increase earnings overseas to offset slowing sales at home.

The purchase comes days after it bought French smoked salmon producer MerAlliance, for an undisclosed amount.

The deal is expected to close later this year pending regulatory approvals.

Thai Union president and chief executive Thiraphong Chansiri called it a “relatively small, but highly strategic acquisition for our group”.

“It will give us a unique position and an opportunity to build ‘King Oscar’ brand in the market worldwide and into our global brand portfolio,” he said in a statement.

“In addition to organic growth, mergers and acquisitions will continue to be the company’s key strategy for business expansion in both short and long term.”

Thai Union said it was aiming to increase sales to $8bn (£4.9bn) by 2020 following the purchase of King Oscar, which is one of the world’s largest suppliers of canned fish such as premium-quality sardines.

King Oscar has two factories in Poland and Norway that help churn out 90 million cans per year. The privately-owned company logged sales worth $80m last year.

“Now we will be part of one of the strongest seafood companies in the world,” he said.