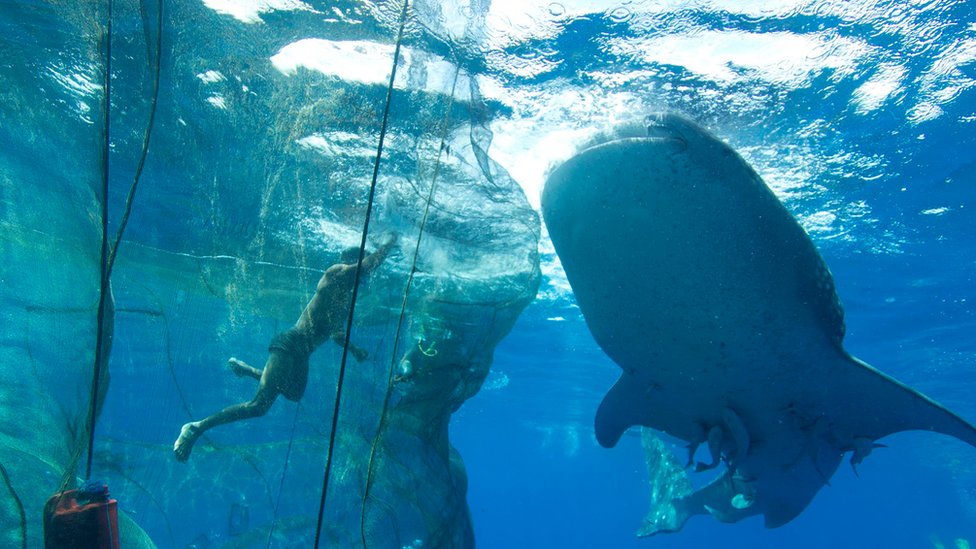 The Giant and the Fisherman

A new festival showcasing short films shot at locations in the world’s seas and oceans will come to Scotland as part of a UK tour.

The International Ocean Film Festival will visit the Queen’s Hall in Edinburgh on 25 September and Inverness’ Eden Court on 27 September.

The short films run from three to 26 minutes long.

They include The Giant and The Fisherman, which shows a friendship that has developed between fishermen and whale sharks

Rather than hunting what are the world’s biggest fish, the men believe the massive filter feeders are a symbol of good luck

Riders to the Sea tells of a surfing duel between a male and female surfer off Ireland’s west coast.

A world-record holder, Mr Nery can reach depths of more than 100m (328ft) and can stay below the surface for more than seven minutes at a time.

Diving is also the subject of Haenyeo: Women of The Sea.

The 12 minutes long film is about haenyeo, or female free-divers, who for generations and over centuries have collected seafood off Jeju Island, in South Korea.

The women work without the aid of scuba equipment.

People Under the Sea looks at the placing of 400 statues on a seabed in the Caribbean Sea, off the coast of Mexico.

The statues are the work of artist Jason Taylor

And Then We Swam is about two friends’ ill-fated attempt to row across the Indian Ocean in a second-hand boat in May 2011.

Survival is also the theme of Alive: Out of Air which was shot by filmmaker Adam Ravetch during an expedition to the Arctic which almost cost him his life

Her sons’ friend Tyron Swan, a big wave surfer and professional diver, takes her out surfing while she is taped up to his back.

Variables with Kimi Werner follows a woman who grew up in Maui, Hawaii’s second-largest island, and her exploration of her place in the tropical ecosystem.