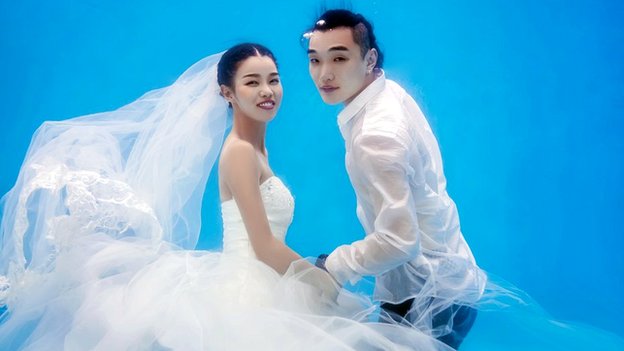 Bride and groom-to-be having their wedding photos taken underwater

China’s wedding market is worth $130bn a year

In a suburb of Shanghai, a shabby old textile mill serves as a model of the wider economic transformation China is trying to achieve.

Where once low-wage workers churned out clothes for export, today a new company has taken up residence that is riding the wave of China’s consumer spending boom.

In fact Mr Wedding – a small business employing 16 people – is part of an industry that has been booming like few others anywhere in history.

According to state media, China’s marriage market – the money spent on ceremonies, catering, honeymoons and hospitality – has grown from almost nothing a couple of decades ago to a whopping annual 800bn yuan ($130bn; £78bn).

And Mr Wedding, from its old factory base, is trying to carve out a little slice of that economy by offering Shanghai’s brides-and-grooms-to-be a familiar service with a twist.

“People can do a lot of almost impossible postures under water,” the founder and owner, Tina Liu, tells me.

“The sense of losing gravity creates the beauty of floating.”

Two of her customers Lin Enxiao and He Huan introduce themselves by their English names – Lamea and YY.

They’re not getting married until next year, but like many Chinese couples they’ve decided to get the wedding photographs out of the way early.

“Most of our friends did their photo shoot on dry land,” YY tells me. “We wanted something different.”

“It feels good to change that picture.”

China did not invent the underwater wedding shoot but it has embraced it like nowhere else.

There are dozens of studios offering the service in Shanghai alone, and it is a crowded, competitive market.

“Some talented people have a good concept and good creativity but they don’t make it because they lack persistency,” Tina says.

Each individual photo shoot is a painstaking, time-consuming process.

Mr Wedding’s team of stylists gives Lamea and YY a full makeover, spending a couple of hours on their hair and make-up.

“We suggest that for underwater wedding pictures brides should wear a white wedding dress with a long trail,” Tina says.

“And we use waterproof make-up so it doesn’t run in the water.”

Then, Lamea and YY, dressed for a full white wedding, are walked not down an aisle but up a small set of steps into the photography tank.

Measuring around 12ft by 12 ft (3.6m by 3.6m) – it is full of warm water with a lifeguard on hand to help them climb in and to accompany them throughout their time in the water.

Tina shouts instructions into a microphone from the other side of the tank’s glass window and, taking a deep breath, Lamea and YY slip beneath the water and their wedding shoot is underway.

Tina started her business in 2003, at that point doing only traditional wedding photography, with an initial investment of 150,000 yuan.

She worked out of a small shop and used Shanghai’s picturesque streetscapes as the backdrop for the photos as she had no studio of her own.

The decision to move out of the city centre, although it gave her space to expand and to build the water tank, presented a major challenge.

“Here, we are quite far away from where most people work so we lost a lot of customers,” she says.

“People used to fight for a vacancy but suddenly our schedule board was blank. I felt depressed and even started to doubt the quality of my work.

“But it was useless to stay in that mood so we started addressing the internal problems, getting the teamwork right, and slowly the business came back up again.”

What is it like to be an entrepreneur in different parts of the world?

The BBC’s global team are talking to people starting their own businesses around Asia. What battles do they face to make their mark and make money?

But like small business owners everywhere she needs to stay constantly on her toes.

In 2009, he says, his organisation’s figures show that around 90% of marrying couples booked the services of a wedding photographer.

Today the figure is down to just 70% – an extraordinary drop-off that highlights the fast changing pace of the industry.

But with more than 10 million couples tying the knot every year there’s still plenty of opportunity for those who can adapt.

She describes how they attach a movie camera to a small remote control drone so that aerial shots can be taken of the couple, who remain firmly on the ground.

People will feel the product is beautiful and amazing, and although they might not be sure about it, they’ll want to try when they see other people’s results she says.

The company is also introducing stop-motion animation in the form of a flipbook style photograph album.

They’re delighted with the results.

“You only get married once in your life,” Lamea says, “so you should spend money on what’s needed.”

“We started preparing a long time ago,” YY adds. “We’ve been saving half of our income and putting it into our wedding fund for all the necessary things we’ll be needing.”